The Future OF Activism

We have to face the fact that popular activism (as opposed to corporate activism) is at a severe disadvantage because of the extraordinary amount of money available to those promoting corporate interests.  The uneven level of resources has been codified by the U.S. Supreme Court, the SEC won't use its power to require corporate political disclosures, and the President and Congress are unwilling to challenge the people and corporations who have money for fear of alienating them.

This is the culmination of the strategy to “de-fund the left” started in the early 1980s by Jack Abramoff and College Republicans and others.  They have executed their strategy masterfully and the advocates for issues that favor people are left scrambling for limited resources.

The need for money – essentially, the oxygen to sustain minimal operations for organizations – has led to a de-sensitized reactions from people on the left.  It seems as if every newsletter, every email, and every correspondence from every organization includes a plea to “Donate Now”.   It has become automatic to ignore the pleas.  Our sensibilities have dulled to the point that we don't even support the organizations and issues who stand for us.

Jack Abramoff and the College Republicans and their types who grew up to become Grover Norquist, Scott Walker, and Paul Ryan, have won the war of money.  No doubt.

But here we stand.  Hundreds and thousands of organizations representing tens of millions of people are left with virtually nothing except the good intentions and uncompensated efforts of the people fighting for economic and social justice.

And this has to stop.  The left has to wake up and “stop bringing a knife to a gun fight”.  We have to play the economic game and leverage our strengths – our numbers.  And it can be done.

The future of activism has to be fought with dollars applied to networks of people.  The networks have to develop working relationships with other networks so as to provide coordinated numbers to affect change.  The networks are not television-based or even print media-based.  While we have net neutrality, our network is based on social media and coordinated memberships.

However, many of you may have caught my qualifier - “While we have net neutrality”.  Big money was dealt a setback by the FCC but big money is powerful and it is patient.  It has not given up efforts to tilt the internet to “pay to play” within which the de-funded populist movement will be unable to participate.  Activists must create a “real” person-to-person network that complements the internet communities we've created.

This means the Boards of Directors and administrators must develop relationships between organizations so multiple communities can be quickly mobilized to promote popular issues.  This means national organizations like the Coffee Party USA must develop its network of members and followers into state and local communities.  Members and followers who actually meet and discuss issues and activism just like the Founding Fathers did over two hundred years ago in Boston, Philadelphia, and Virginia.

This means the individual must be engaged on several levels if freedom and rights are to be regained from the money who bought them.  Here are suggestions how you can be enagaged:

Friends, it's like the old Janis Joplin/Kris Kristofferson lyrics, “Freedom's just another word for nothing left to lose.”   They've taken our money, they've minimalized our jobs, they're chipping at our rights, and they're undermining the foundations of what we believe.   Our results will be determined by our actions – not our intents.  That is the future of activism.

The Coffee Party was inspired to be a place where people from all perspectives can share their ideas, hopes and dreams and have them received with respect, compassion and reason. We see that the desire to 'be right' has led to a competitive and then vilifying culture where we are at war with the “other half” of the country. The founders of Coffee Party believed we could uphold the ideals of our country and turn towards one another to find common ground and build our future. Based on that inspiration, the Coffee Party has taken positions on three issues; campaign finance, Wall Street and tax reform. These have been the primary mechanisms used to 'divide and conquer' the populace so we spend time fighting with each other instead of staying engaged in the governance of our communities, states and country.

As part of our way to build relationships with each other, we developed the civility pledge, which we now require all volunteers to sign. It is our code of conduct. We do not ask anyone to give up their beliefs or ideology. We do ask that people listen respectfully and respond with dignity. That may be expressed by comparing facts, an outpouring of compassion or simply an agreement to disagree. Is this idealistic? Yes, of course. We seek to practice and reward the higher road because, frankly, the lower road is filled with bodies and excrement; an unpleasant place to travel. Coffee Party is a place of peace...where we recognize each other through a humanitarian lens. Again...without giving up our own identity. Being righteous is like being addicted to our own opinion. It closes our ears and our hearts to another person's experience.

So...how do we accomplish our mission? We do so by building strong bonds with each other that cannot be distracted by the point-scoring, I'm right and “they” are stupid narrative. We become engaged with our elected officials and recruit our friends and neighbors to be involved also. We host civil conversations to learn the hopes of others and jointly create our future to include the hopes of all. When I ran for public office, I asked people what they wanted for their lives. Regardless of party, people wanted a way to earn a living, a safe neighborhood and to leave more opportunity for their children than they had themselves. It is said the devil is in the details, and it is. While some people see our system and point to corporations as the problem, others point to the government. Yet other perspectives will point to voter apathy or oligarchic interests. Regardless of our personal perspectives, it is our duty to find the piece of the solution that “they” hold and incorporate it into our collective future.

Coffee Party is also about providing a forum for those multiple perspectives. Some perspectives we will love and some we will hate. Respect is a muscle that requires exercise. Let’s work out together… and Coffee Party ON! 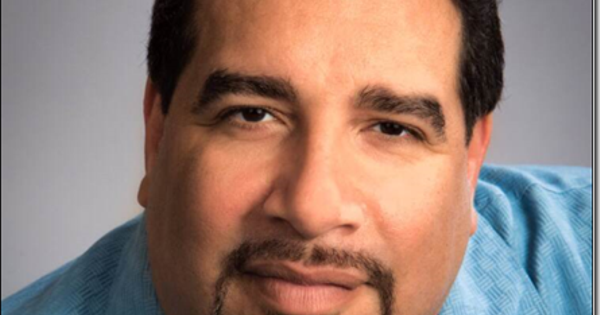 Activism is very tough.  I would debate that it is one of the hardest choices a person makes because disappointment is so prominent.  On the flip side often one will meet and work with fantastic people.  People,  who believe that paying attention to the issues of today and, helping others, is important.   Recently, I have had both accomplishment and a chance to again work with good people. It was a good month.

I am charged with overseeing and improving Coffee Party USA’s Internet Infrastructure.  This responsibility covers a vast amount of subjects. Coffee Party USA is a large grassroots organization with many partnerships and members, which includes a large social media presence.  Branding, promotion, expanding resources, making sure everything works in the IT world, design, communication and so on are some of the matters I work to improve.

When I went to work on launching a new website template and format I was fortunate to be assisted by the Solutions Institute (SI).  The Solutions Institute is an activist consulting and think tank organization.  The brain child of Dan Johnson, who founded PANDA (People Against The NDAA), SI has an extensive amount of resources and perhaps the strongest group of advisors ever assembled in the activist consulting world.

Explore our new site. Give us your feedback. We aim to provide a site that makes interfacing with our members and followers seamless. 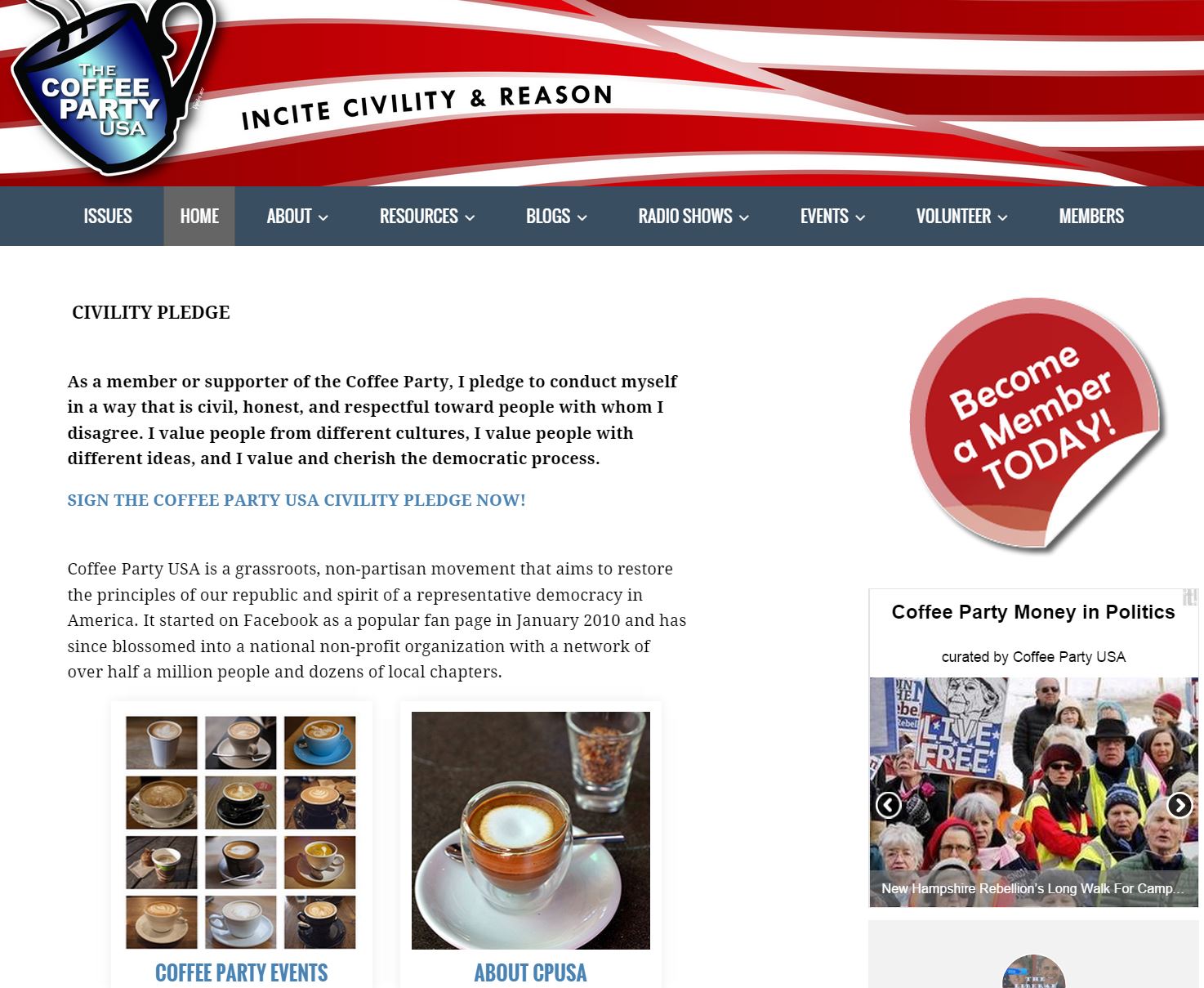 If you are and activist or an activist organization of any type and are looking for ways to improve you message, reach, or branding reach out to the Solutions Institute (http://solutions-institute.org).