Who Will Be The Neighbor?

But somewhere in the process of clarifying that age-old â€œwho is my neighborâ€� question, we think we need to decide who is in our circle and who is not. Tribal tendencies demand specification: we want to know exactly where we stand in the various social hierarchies we invent for ourselves.

Of course there is another definition for the word â€œenemyâ€� and we humans quickly learn not to trust those who do harm. But the act of doing harm to another begins in the mind; there is a cognitive shift in basic understandings about what it means to be human. Someone who acts as an enemy to another has already placed them outside their circle and named them as â€œother.â€� They justify their actions based on contrived categories of who is in and who is out. Then the one who has been hurt responds to that mistreatment by doing the same thing: if we have been damaged by X or Y or Z, then everyone who is like them must also be our enemy.

It is a vicious cycle. Not at all neat or logical. We humans can be a complex mess. 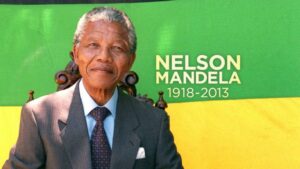 Nelson Mandela was honored recently at a 100th birth day celebration in South Africa. Here is someone who taught himself how to break free of the vicious cycle and his life still serves as an example to all of us want to learn a better way.

In prison, he studied Afrikaans so that he could better understand the people who were jailing him. And when he got out of prison, he extended a hand to those who had jailed him, because he knew that they had to be a part of the democratic South Africa that he wanted to build.

â€œTo make peace with an enemy,â€� he wrote, â€œone must work with that enemy, and that enemy becomes oneâ€™s partner.â€�

Charlotte Coyle is a past president of Coffee Party USA and continues to serve on the Board of Directors.