Last month, I created a Facebook post asking for feedback to prep for this article. I had hundreds of very thoughtful comments and idea exchanges.  Thank you all for participating!

The post posed a question; have we created a culture of victimhood and if so, what would be a healthy alternative? First, let me be clear. There are situations where people ARE victims. From First Nations to slavery to rape and more, everyone has been victimized by other people and by situations out of their control. What I am referring to is claiming harm for the sake of social or political gain. I’ll refer to this as “Victim Identity” or VI for short.

I mean… people are actually competing to have Victim Identity (VI) status in any given situation; from the “War on Christmas” to the “War on Women” to the standoff in Oregon.  Why are people so quick to claim “they are harming me?”  There must be some benefit.

It was noted by several people that real victims (meaning those who have been systemically oppressed) are starting to gain traction (i.e. power), so the “powers that be” are looking for a way to keep the power they have.  Still other people noted that changing OTHER people’s behavior was only possible by inflicting a painful consequence. This got me to thinking about power dynamics and who has power in any given situation.  And here’s the kicker: People are claiming Victim Identity in order to gather power at the same time, they are saying they don’t have any.

A victim is one of three main characters in any good drama. And we LOVE drama. Look at Hollywood. Every blockbuster has 1) a victim 2) a hero and 3) a villain. So where is the power for each of these roles? In most cases, the villain has unearned power. The hero takes the power away and the victim is the beneficiary of the hero’s actions. So the victim in our drama triangle wins the power!!! Only it is temporary, and long-term, we all lose. 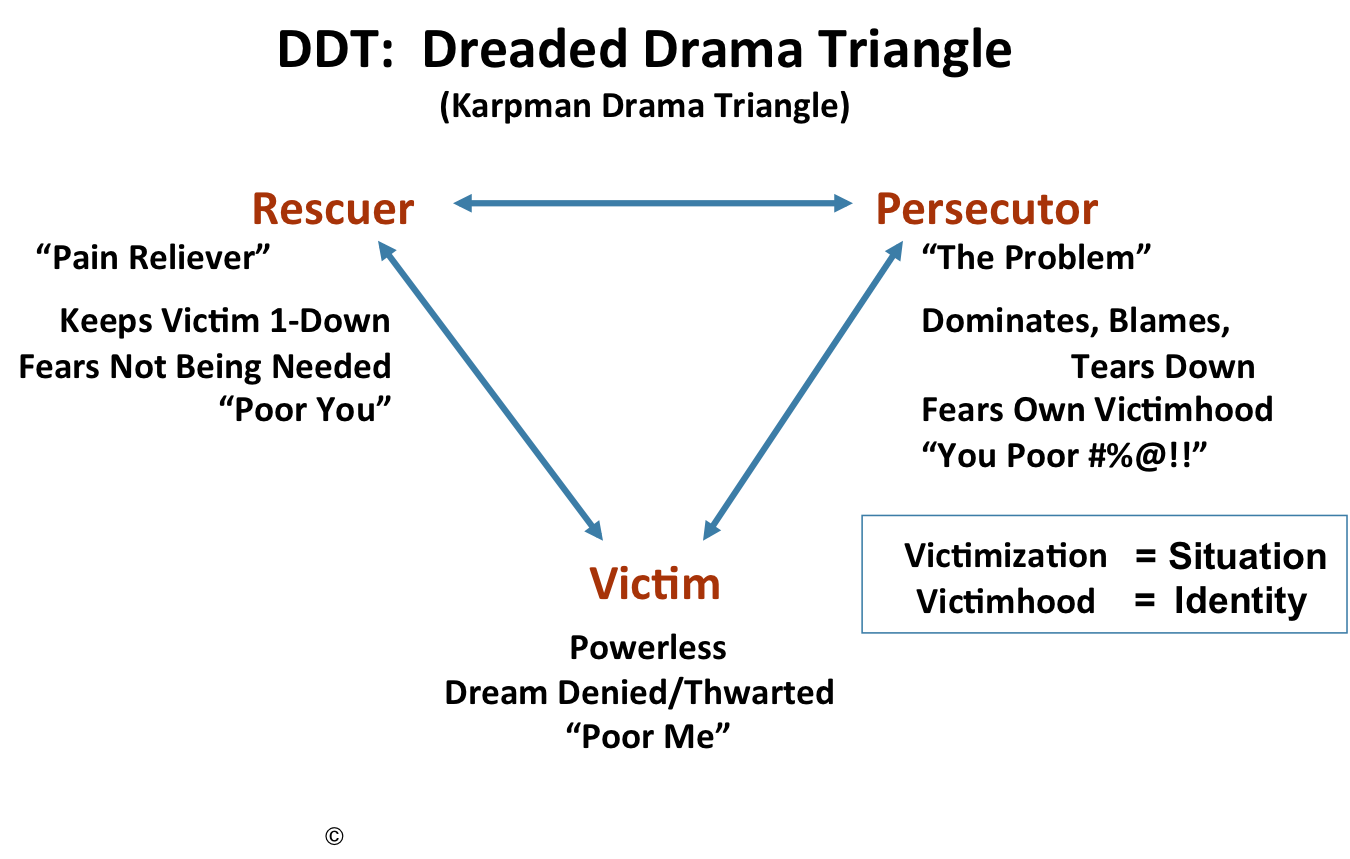 Could this be what is happening to us socially and politically?  Are we claiming Victim Identity so a Hero will rescue us from (points fingers dramatically) the Villain?  Look at our election this year. People who are disenfranchised are looking to their candidate to “save us” from 1) Wall Street & the wealthy who are not paying their fair share or 2) the over-reaching federal government or 3) fill in your own blank.

I don’t know about you...but I’m really sick of this drama triangle. It makes for great movies and lousy governance. Instead, let us create a culture that honors each other and is curious about differences while actively building better relationships. When I listen to people about what we want for our future, I hear three things over and over.  Live in a safe and peaceful place, earn a good living, and leave a better life for our kids.

We need a new story about ourselves and our neighbors. We need a new power dynamic where the citizens KNOW they are in charge...and so do the elected officials. Let’s have less consumerism/marketing and more authentic engagement with each other. Together, let’s create a new narrative about the United States. One that rejects the drama triangle as our governance system.