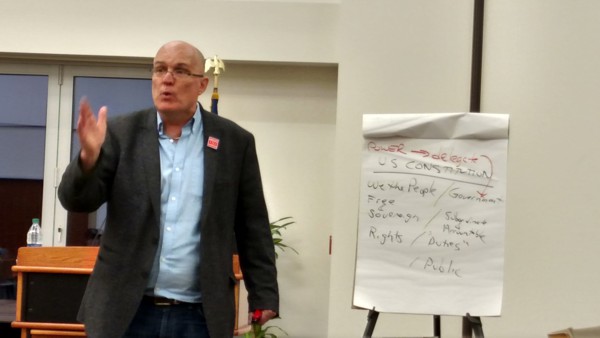 Move to Amend's David Cobb dazzled students and the community alike on several Lone Star College System campuses in Harris County and Montgomery County Texas. David Cobb addressed students, faculty, staff, and members of the community about the rights of corporations versus the rights of individuals. He took a rather boring and antiseptic subject and brought it to life by illustrating its importance to our individual freedoms and to the unconstitutionality of corporate modus operandi.

David Cobb is Outreach Director of Move to Amend. He is one of the founding members of the Board of Directors and authors of the We the People Amendment. A San Leon, Texas native, a previously successful lawyer with his own practice, and current political activist, Cobb ran for attorney general of Texas in 2002 and U.S. President on the Green Party in 2004.

David is a lawyer and political activist. David has sued corporate polluters, lobbied elected officials,  run for political office himself, and has been arrested for non-violent civil disobedience.  He truly believes we must use ALL the tools in the toolbox to effect the systemic social change we so desperately need.

David Cobb barnstorms the entire country throughout the year empowering audiences to take back their inalienable rights and their constitutional rights, not with hope, but with collective action. Move to Amend has grown to over 402,000 activists throughout the entire nation. There have been more than 600 resolutions and ordinances passed throughout the nation demanding a constitutional amendment in some form of the other to codify that money is not speech and a corporation is not a person.

Get a cup of coffee or your favorite drink and watch Cobb's empowering presentation. More importantly, get engaged in the body politic. Start by learning about the We the People Amendment and then sign the Move to Amend petition to be a part of the movement.